Previous Next
Cycling Holland with kids back in time
style :
Selfguided
Level :

price in double room from: € 685
Check prices / book now
Cycling Holland with kids back in time

> > Search results
> Netherlands
> Cycling Holland with kids back in time

This cycling tour is ideal for families. Distances are pleasant and do-able for children. The sights you will encounter along the way are interesting for the old and the young. As for your hotel accommodation, there are family rooms available if you want one. Naturally, this tour could also be suitable for adults who aren’t traveling with children but would like more time for sightseeing or – for whatever reason - less time in the saddle.

From Amersfoort the route goes via the northern side of "royal" Baarn and beautiful Naarden, to Muiderberg

From Muiderberg you will cycle to Muiden where you can visit medieval Muiden Castle. From here, it is a short ride to Amsterdam. A pleasant cycle along the former estuary brings you to Waterland, with its bird-rich peat meadows, ancient canals and watercourses. After that you will proceed to Amsterdam. There is more to this capital city than just canals, bridges and over 800,000 bicycles. How about art, culture, shopping, dining out (have you ever tried Indonesian food?) or going for a drink in a cafe? After taking your leave of Amsterdam, the route continues atop the old sea dike to Volendam. This fishing village has always had a character all of its own.

Your first stop is the town of Hoorn, pleasantly situated on a bay. The historical town centre has hundreds of listed buildings, many dating back to the 17th century. The street plan has been beautifully preserved. There are two marinas. From Hoorn you will continue along the old Zuiderzee sea dike. Windmills and church spires mark the horizon of an extensive polder landscape dotted with quaint regional style farmhouses with a square base and pyramid roof. At the end of the afternoon you will reach the town of Enkhuizen. Its historical town centre is said to be one of the Netherlands’ most beautiful. It is perfectly situated on the lake and is crisscrossed by numerous canals. The seventeenth century city wall and unique fifteenth century churches make the town a Mecca for lovers of history. If you would like to spend a whole day in open-air ZuiderZeeMuseum it is a good idea to book an extra night in Enkhuizen. The museum illustrates what life was like on the shores of Zuiderzee. Appeals to kids too!

In low season, when the ferry to Urk is not going, you need to cycle across a 32 km dike towards Lelystad.

Please note that until further notice the cycle path on the dike is partly closed due to construction works. There is a shutte bus you can take (incl. bike). You will receive more information in your travel documents. In the summer months the bike path is expected to be open again.

After Lelystad, you will cycle the width of Flevoland, on ‘new land’, past farms and fields and through the woods to Harderwijk, back on the ‘mainland’. This is where the Dolphinarium can be found, Europe’s largest zoo for marine mammals. Children and adults alike will enjoy spectacular shows with dolphins, walruses, sea lions and sharks. After Harderwijk it is only a short distance to Hulshorst where you can relax at the hotel by the pool.

From Hulshorst, pedal to the banks of the Veluwerandmeren lakes and make your way to Amersfoort. The greatest charm of this stretch of the route is the mix of woods, water and polderland.

After breakfast in your hotel it’s time to go home.

The closest airport you can fly into is Amsterdam Schipol (AMS).

You can reach Amersfoort by train from Amsterdam Central Station in 35 minutes. The price of the trip is € 7.60 one way. 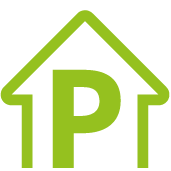 Parking possibilities at the hotel

If you don’t bring your own, you can rent a bicycle from us. Our 24 gear touring bikes will be delivered to you at the start of your holiday and you must return them before you go home. All bikes are equipped with a chain lock and a repair kit. Hybrid and e-bikes also include a saddlebag.

Our hybrid bikes have 21-gears with hand brakes. We will assign the bikes according to gender, as we have both men- and women style bikes.

Tandem bikes are suitable for two adults only. The tandem bikes have a frame size of 48 cm. We mostly use the Victoria Spezial 8.7. This tandem bike comes with 24-derailleur gears or nuvinci gears. The height of the handle bars on a tandem bike cannot be adjusted.

E-bikes are always on request, as we have a limited amount of e-bikes available. Our e-bikes are unisex, have handbrakes and have ten gears. Our smallest e-bike has a frame size of 49 cm and is suitable for persons that are 155 cm (5ft1) or taller.